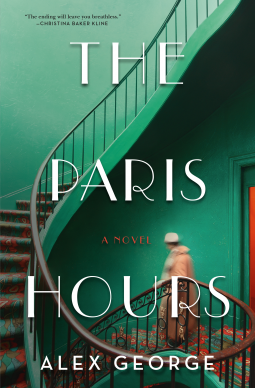 The Paris Hours by Alex George

Welcome to my stop on the blog tour for The Paris Hours!  Check out my thoughts and ruminations on the book, as well as an excerpt, below.

What do an Armenian puppeteer, a down-on-his-luck artist, a French journalist with dreams of America, and Marcel Proust’s former housekeeper all have in common?  At first you’ll think “absolutely nothing”, but oh, you would be wrong.

Author Alex George’s newest offering rambles unhurriedly through a single day in the City of Lights in the time between the Wars, introducing us to this foursome of Parisians (both native and not), each with a quiet purpose, each unknown to the others.  Armenian Souren Balakian is a refugee, who scrapes out an existence giving free puppet shows in a local park each day for coins thrown in a suitcase.  The quintessential starving artist, Guillaume Blanc, needs a big sale from one of his works in order to pay off an unsavory mobster.  Journalist Jean-Paul Maillard, who pines for his wife and child, is perhaps the most melancholy of the quartet (although Souren could give him a run for his money there); he’s constantly looking for his daughter but will he ever find her?  Finally, Camille Clermont embarks on city-wide search for a lost journal belonging to Proust and harboring a black secret.  And while our protagonists are seemingly ordinary folks, they also rub elbows in Paris with Gertude Stein, Josephine Baker, Ernest Hemingway, Mr. Proust, and host of other only slightly-lesser celebrity lights.

The characters are the thing here, and these characters are Alex George’s strength.  As the day unfolds, stories and histories are revealed, and we come to know and understand Camlle, Jean-Paul, Souren and Guillaume a little bit better with each passing page.  This is a novel on a constant, slow burn and, if you’re looking for a quick payoff, you won’t find it here.  Kindling is steadily and masterfully thrown on the smoldering embers of each individuals’ story until they all come together in one blazing conflagration.  This is a novel that rewards patience.

Many thanks to Flatiron Books and Cat Kenney for inviting me to be a part of the blog tour and providing me with a review copy of The Paris Hours.  Many more thanks are due to Alex George for creating this lovely story and sharing it with us.

During these difficult days, it’s more important than ever to support our small and local businesses.  If you’re so inclined, you can click here to purchase this title from your local indie bookstore.  And check out the excerpt below!

THE ARMENIAN WORKS BY the light of a single candle. His tools lie in front of him on the table: a spool of cotton, a square of fabric, haberdasher’s scissors, a needle.

The flame flickers, and shadows leap across the walls of the tiny room, dancing ghosts. Souren Balakian folds the fabric in half, checks that the edges align exactly, and then he picks up the scissors. He feels the resistance beneath his fingers as the steel blades bite into the material. He always enjoys this momentary show of defiance before he gives the gentlest of squeezes, and the scissors cut through the doubled-up fabric. He eases the blades along familiar contours, working by eye alone. He has done this so many times, on so many nights, there is no need to measure a thing. Torso, arms, neckline—this last cut wide, to accommodate the outsized head.

When he has finished, there are two identical shapes on the table in front of him. He sweeps the unused scraps of cloth onto the floor, and picks up the needle and thread. After the sundering, reconstitution. Holding the two pieces of material in perfect alignment, he pushes the tip of the needle through both layers of fabric, and pulls the thread tight. He works with ferocious deliberation, as if it is his very life that he is stitching back together. He squints, careful to keep the stitches evenly spaced. When he is finished, he breaks the thread with a sharp twist of his fingers and holds the garment up in the half-light. A small grunt of satisfaction.

Night after night Souren sits at this bench and sews a new tunic. By the end of the day it will be gone, a cloud of gray ash blowing in the wind, and then he will sit down and create another.

He lays the completed costume on the work surface and stands up. He surveys the ranks of sightless eyes that stare unblinking into the room. Rows of hooks have been hammered into the wall. A wooden hand puppet hangs from every one. There are portly kings and beautiful princesses. There are brave men with dangerous eyes, and a haggard witch with warts on her ugly chin. There are cherubic children, their eyes too wide and innocent for this motley group. There is a wolf.

He unhooks a young boy called Hector and carries him to the table. He pulls the newly sewn tunic over Hector’s head. He turns the puppet toward him and examines his handiwork. Hector is a handsome fellow, with a button nose and rosy cheeks. The tunic fits him well. The puppet performs a small bow and waves at him.

“Ah, Hector,” whispers Souren sadly. “You are always so happy to see me, even when you know what is to come.” He looks up at the clock on the wall. It is a few hours past midnight. The new day has already begun.

Each evening Souren battles sleep for as long as he can. He works long into the night, applying fresh coats of paint to the puppets and sewing new clothes for them by candlelight. He stays at his workbench until his eyes are so heavy that he can no longer keep them open. But there is only so long he can fight the inevitable. His beloved puppets cannot protect him from the demons that pursue him through the darkest shadows of the night.

His dreams always come for him in the end.

Guillaume Blanc sits up in his bed, his heart smashing against his ribs, his breath quick, sharp, urgent. He stares at the door, waiting for the next angry tattoo.

The whispered words he heard through the door scream at him now: Three days.

His shoulders slump. There is nobody knocking, not this time. The noise is coming from somewhere closer. Guillaume turns and squints through the window above the bed. The first blush of early morning sunlight smears the sky. From up here on the sixth floor, the rooftops of the city stretch out beneath him, a glinting cornucopia of slate and glass, a tapestry of cupolas and towers. There is the culprit: a woodpecker, richly plumed in blue and yellow, perched halfway up the window frame. It is staring beadily at the wood, as if trying to remember what it is supposed to do next.

It is early, too early for anything good.

The shock of adrenaline subsides enough for Guillaume to register that his temples are pounding. He rolls over, spies a glass of cloudy water on the floor next to the bed, and drinks it thirstily. He rubs a dirty palm against his forehead. An ocean of pain to drown in. An empty wine bottle lies on its side in the middle of the small room. He stole it from the back of Madame Cuillasse’s kitchen cupboard when he staggered in last night. It was covered in dust and long forgotten, not even good enough for her coq au vin, but by then Guillaume was too drunk to care.

It feels as if the woodpecker is perched on the tip of Guillaume’s nose and is jabbing its sharp little beak right between his eyes. It’s typical of his luck, he reflects. The bird has no business in the dirty, narrow streets of Montmartre. It should be flying free with its brothers and sisters in the Bois de Boulogne, hammering joyfully away at tree trunks, rather than attacking the window frame of Guillaume’s studio. And yet here it is.

The woodpecker’s head is a ferocious blur, then perfectly still again. What goes through its head, Guillaume wonders, during those moments of contemplative silence? Is the woodpecker asking itself: who am I, really, if I am not pecking wood? Am I, God forbid, just a bird?

Guillaume lets out a small moan. There are lightning bolts erupting behind his eyes. He casts his mind back to the previous night. He was wandering through Montmartre, anxiously trying to outpace his problems, when he had seen Emile Brataille sitting alone in the bar at the end of his street. Brataille is an art dealer who spends most of his time at the zinc of the Closerie des Lilas, schmoozing with collectors and artists, striking deals, and skimming his fat commission off every painting he sells. He has no business in Montmartre anymore: all the painters whose work hangs on the walls of his palatial gallery on Boulevard Raspail have left Guillaume’s quartier for the leafy boulevards of Montparnasse, where the wine is better, the oysters fatter, and the women more beautiful. Guillaume pushed open the door and slid onto the chair next to Brataille.

The alcohol lingers sluggishly in his veins. How much had they drunk, in the end?

After they were three or four carafes to the good, Emile Brataille made his mournful confession: he’d come to Montmartre to declare his love for Thérèse, but she wanted nothing to do with him. And so here he was, drowning his sorrows.

Thérèse is a prostitute who works at the corner of Rue des Abbesses and Rue Ravignan, next to Le Chat Blanc. Guillaume knows her, albeit not professionally: he has painted her many times. Lubricated by the wine, he embellished this acquaintance into a devoted friendship, and suggested to Brataille that he might be able to intercede on his behalf. At this, the art dealer began to weep drunken tears of gratitude. How can I ever repay you? he asked. Guillaume scratched his chin. I don’t suppose you know any rich, art-loving Americans, he said.