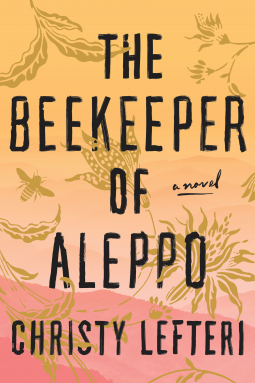 According to Christy Lefteri, the question she asks in her novel is this.  What does it mean to see?  Afra, an artist and the wife of the beekeeper, is blind.  Is it because her eyes are damaged or because she does not want to see any more than she has already seen?  Nuri, the beekeeper, sees a small child called Mohammed.  Does this child exist or does Nuri want to see him, need to see him?  When do we see what is there to be seen, and when are we blind?

As soon as I began to read, my question was this:  Who is Christy Lefteri, and how does she know so much about Syria, the Syrian people, the culture and its refugees?  Is she Syrian?  No, she isn’t, but this talented writer must also be a magician because I was transported, a rare and profound experience.  As she explains in the Author’s Note, Ms. Lefteri worked as a volunteer at a UNICEF refugee center in Greece – absorbing faces, stories, mental images of Syrian and Afghani refugees.  Back in the UK between stints, she engaged a Syrian tutor to teach her Arabic, and this young man also served to verify authenticity as she wrote this fine book.  OK, that’s the background, the good practical answer, but it doesn’t explain the magic.

But bees are magic, aren’t they?  Must be.  Bees turn pollen into honey.  Somehow they build perfectly uniform cells in which to store honey and raise their young.  They communicate without words, cooperate, sacrifice and live peacefully within the hive.  Oh, wow, magic.  We can’t do any of that, and we’re humans.  In a once peaceful Syria, Nuri and his cousin Mustafa, a scientist, kept bees that could do all these magic things, but it is not peaceful now and the bees have died.  Mustafa sends his wife and daughter to safety in the UK and soon joins them, but Nuri and Afra stay behind amid increasing fear and destruction.  Mustafa begs Nuri to come to the UK where they can start again with the bees they love, and, at last, Nuri and Afra join thousands and thousands of refugees making their way out of the Middle East and across Europe.  Hoping, despairing, giving up, hoping.  No guarantees.

Something powerful going on with those bees.  Is the Universe calling on Line One?  So many bee-themed books in recent years, don’t you think?  And here’s another one………that you should read.  Doesn’t matter how many bee books there are.  This one.

This one buzzed onto bookstore shelves back in late August, so go ahead and order up a copy from your local indie bookstore now.

Full Disclosure:  A review copy of this book was provided to me by Random House Publishing Group – Ballantine / Ballantine Books via NetGalley in exchange for an honest review.  I would like to thank the publisher, the author and NetGalley for providing me this opportunity.  All opinions expressed herein are my own.