Entropy.  Accelerating/decelerating half-life.  De-organizing systems.   I understand nothing.  Science, technology, Earth is mid-Apocalypse, and a failing space ship carries four pioneers to an unnamed planet.  My mind goes “Yadda, yadda, yadda.”  And yet.  And yet….   You must begin in a tiny Florida town, Easter, on the day Challenger explodes.  In a small college lab, an experimental machine named Crucible activates; and time begins to move forward, backward, to slow.  Water freezes, ponds boil and frogs scream, viscous liquid drips from power lines.  Then, in Easter, time stops.

But, you see, this book, this story, does not focus on science and technology, or on an imaginary world.  Rather, it is built around its characters, human beings speaking and thinking as we might, and what treasures they are.  At its core there is Nedda, a prodigiously gifted eleven year old, her mother, a brilliant chemist who bakes experimental cakes and her father, the prof who created Crucible.  No matter that I don’t understand entropy.  What matters is that I will never forget this story and these people.  One of my two best reads so far this year.  Shines as brightly as the light from any star in any galaxy real or imagined.  Hitting bookstores on May 7 (Bloomsbury USA).

Full Disclosure: A review copy of this book was provided to me by Bloomsbury USA / Bloomsbury Publishing via NetGalley. I would like to thank the publisher and the author for providing me this opportunity. All opinions expressed herein are my own.

I always hesitate when I see a new contestant in the dystopian/zombie apocalypse rat race.  Let’s face it.  By this point the genre has been done to death, and while I’m still an avowed fan of all stripes of horror, it takes some pretty impressive writing to make the walking dead stand out to me these days.   Enter Kevin Munoz’s debut, The Post.

What’s left of humanity exists in small, protected enclaves in Munoz’s world, after a pandemic decimates Earth’s population and oil supplies are contaminated.  The Little Five, a walled district in Atlanta, Georgia, is the setting for this tale, which on top of “hollow-heads” and “shriekers”, features murder, human trafficking, slave-trading and a white-knuckle journey to rescue a kidnapped teen.  Munoz’s sharp yet compassionate writing makes for a stand-out zombie fiction entry.  The Post just released earlier this week from Diversion Books, so curl up on the sofa on one of these cold winter’s nights and give it look!

Full Disclosure: A review copy of this book was provided to me by Diversion Books via NetGalley. I would like to thank the publisher and the author for providing me this opportunity. All opinions expressed herein are my own. 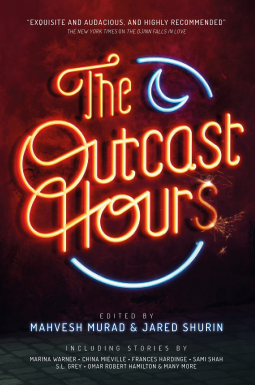 A collection of short stories (edited by Mahvesh Murad and Jared Shurin) set in those lonely, eerie hours after the sun goes down, stories about those who live, work, exist during those hours, and about things that….occur…..then.   These are original, delicious, fun, thought –provoking and, yes, creepy, so have a go.   You won’t put it down until you have to turn on the lights.  Scheduled to drop somewhere between February 19 and February 22.

Full Disclosure: A review copy of this book was provided to me by Rebellion Publishing / Solaris Books via NetGalley. I would like to thank the publisher and the author for providing me this opportunity. All opinions expressed herein are my own.

Emma Newman’s Planetfall appears, at first blush, to be a straight-up, sci-fi colonization tale.  A group of human space pioneers follows their leader, Suh, to an unnamed planet far, far from Earth.  Once the colonists arrive on said unknown planet, Suh vanishes into a huge, odd plantlike structure found growing, or possibly built, there and dubbed “God’s city” by the settlers.  Suh never reemerges from God’s city and becomes an oracle of sorts, believed to be still alive somewhere inside and called the Pathfinder by her disciples.  She even becomes the subject of an odd pilgrimage a chosen colonist makes into God’s city as a yearly rite.

Twenty years later, when the events of Planetfall take place, the colonists are thriving, having quite successfully built a life for themselves on this anonymous rock spinning through space.  You’ve got Mack, your strong, male colony leader with a secret.  Helping to keep that secret, and hiding secrets of her own, is your female protagonist, Ren, the colony’s master printer (practically everything the colony needs to exist, including food, is created by 3-D printers, a concept I have yet to entirely get my head around).  And you’ve got a wild card in Sung-Soo, a newcomer, offspring of two, long-thought dead, original colonists, and apparent grandson of Suh.

All’s good and usual in sci-fi land so far, right?  So while you, the unsuspecting reader, are trucking along, engrossed in this, your latest spacey discovery, you begin to realize that Ren, the first-person narrator of Planetfall, is just a weeeeee bit different from your average planetary colonist.  She’s fiercely private, she suffers from social anxiety and is a card-carrying introvert.  Shoot, I could even relate a little . . . to a point . . . until it became clear that there was something very, very off with Ren.  Hint:  There’s a reality show showcasing people like Ren.

And this is where Planetfall becomes a different kind of colonization tale.  I think it’s safe to say Emma Newman gets points for originality by incorporating a character with Ren’s particular disorder into her sci-fi work.  I can’t say I particularly liked Ren, even though I could empathize with her at first.  But her refusal to come to grips with her disease leaves me frustrated as she becomes increasingly more destructive to herself and the entire colony.

Newman has a new book coming out this fall, set in the same world as Planetfall.  I’m curious to see where she heads for the next installment.

Full Disclosure: A review copy of this book was provided to me by PENGUIN GROUP Berkley, NAL / Roc via Netgalley. I would like to thank the publisher for providing me this opportunity. All opinions expressed herein are my own.

I usually have my nose stuffed in three or so books at any one time:  one physical book, one or two Kindle books and one audiobook.  Right now, I’m reading the trade PB of 52 Loaves:  A Half-Baked Adventure, by William Alexander; Colum McCann’s Thirteen Ways of Looking (which just dropped today from Random House) on Kindle, as well as a horror, short-story anthology, Suspended In Dusk, edited by Simon Dewar (also on Kindle); and finally, on audio, the second installment in Marcus Sakey’s near-future Brilliance Saga, A Better World, narrated by Luke Daniels (love me some Luke D.!).  I’ve just finished Furiously Happy:  A Funny Book About Horrible Things by Jenny Lawson (aka The Bloggess) but wish it had been about a thousand pages longer.  It deserves, and will get, a blog post all its own.

The audiobooks carry me through my one-hour long commute each day (one-way!) and the Kindle editions keep me going through endless miles on the treadmill.  The actual books and the Kindle versions compete for the remainder of my reading hours . . . or minutes or seconds!  All depends on when I can squeeze in a few more word-filled moments throughout my day.

If I had a nickel for every time someone has whined to me, in the most high-pitched, nasal tone she can muster, “I love to read but I can never find the time” . . .  Believe me, if you truly want to read you will make the time.  Besides the drive time and the gym, I also squeeze in a few pages while I get ready for work in the morning, on my lunch break, while the Hubs watches something loud and obnoxious on television (i.e., war movies, more war movies, and oh, did I mention war movies?), and lying in bed at night waiting to fall asleep.  It’s not that difficult if you put your mind to it . . . unless you have kids – then I know the challenge is truly amplified for you and your priorities are where they should be, with your kids.  Sure, I would much rather have a solid, uninterrupted hour or two (or three or four or five!) to really dig in and lose myself in whatever I’m reading but that’s not always realistic.  I’ve learned to appreciate the time I can get, when I can get it and to make the most of it!