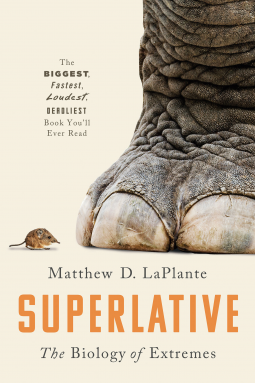 The outliers:  biggest, smallest, deadliest, smartest, strongest, oldest, fastest.  A sort of Guinness Book of Records for grown-up nerds, huh?  Same fascination factor, for sure, but with purpose and science to boot.  What can we learn from these extremes of nature?  How did they come to be?  What are the challenges to their survival?  How can they benefit us?

For example, in “Why Almost Everything We Know About Giraffes Is Wrong”, we learn that prevailing theories say giraffes developed their unique bodies and long necks in order to graze from tree tops.  But did they?  They seem to bend down to eat from grasses and shrubs as much, if not more, than in trees.  So why those long necks with those pretty little heads at the top?

And there’s “Why Elephant Cells Are Like Empathetic Zombies”.  Elephants grow so rapidly that cells tend to mutate, and so it seems that elephants would develop cancers at an astounding rate – but they don’t.  In elephants, mutating cells appear to “develop a conscience” and die.  Now wouldn’t it be great if our pre-cancerous cells offed themselves?  Yeah, that’s the ticket, and we’d have elephants to thank, so back off, poachers!

I’ve only sampled Matthew LaPlante’s good book, but I’ll be back, and it’s perfect for enjoying this way if you like.  Of course, for many, it’ll be like potato chips.  Hard to stop with one or two.  Whatever your style, munchies or the full buffet, the line starts here.

Be the biggest, smartest, fastest reader to buy this book from your local indie bookstore.

Full Disclosure:  A review copy of this book was provided to me by BenBella Books via NetGalley in exchange for an honest review.  I would like to thank the publisher, the author and NetGalley for providing me this opportunity.  All opinions expressed herein are my own. 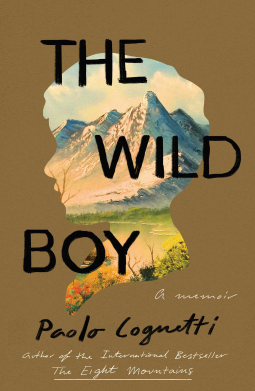 Italian writer Paolo Cognetti grew up in the city, but until the age of twenty, spent summers in the Italian Alps, free to roam, a wild boy.  At thirty, Paolo suffers a rough patch and cannot write.  So he reads.  Thoreau’s Walden, Jon Krakauer’s Into The Wild, and Elisee Reclus, The History of a Mountain, and he decides to return to the Alps hoping to live an essential life and to find that wild boy again.  Renting a refurbished cabin at 6,000 feet above sea level, he spends three seasons there, “…where the last conifer trees gave way to summer pastures.”  Not dangerously isolated as was Chris McCandless of Krakauer’s book, Paolo has a couple neighbors across the way; there are summer cowherds who come and go; and he even gains a dog that didn’t make the cut as a herding dog.  While this book is neither as gripping and gritty as Into The Wild nor as introspective and philosophical as Walden, Cognetti is an excellent writer, and this is a beautiful book.  Did he find what he was looking for?  Did he even know what he was seeking after all?  Do any of us?  Get away for a while with Mr. Cognetti, and find something for yourself in his breathtaking Alps.

Currently scheduled to hit bookstores on July 2, 2019. The Wild Boy can be pre-ordered here from your local indie bookseller or click here to order from Amazon

Full Disclosure:  A review copy of this book was provided to me by Atria Books via NetGalley in exchange for an honest review.  I would like to thank the publisher, the author and NetGalley for providing me this opportunity.  All opinions expressed herein are my own. 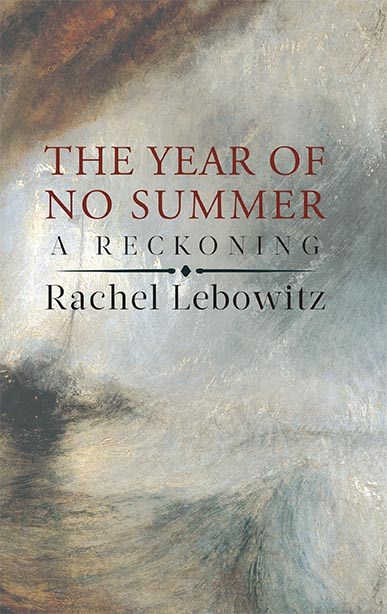 I did not finish this, though I feel that, at some point, I might go back.  Certainly I think I’ll be tempted to do so.  Odd and intriguing.  My first thought was stream of consciousness, but…well…maybe.  Freeform history?  Some sort of literary tone poem?  Or something like that.  Say what?  The language is beautiful and poetic, sometimes coalescing into more straightforward prose; and I wanted to read this simply for the words, lovely words; but then that coalescing comes along, taunting me with the possibility of narrative.  I’ll let the author speak for herself, and she ends by saying, “I’m standing here thinking it all fits together, but how or why, I know not.  My hands are too small for God.”  Yes, right there, and Rachel Lebowitz, I admire what you’ve done, and I think it fits together, too.  I want it to.  Maybe I’m just not ready for it.

But you might be and, if so, click here to order from your local indie bookstore or from Amazon

Full Disclosure:  A review copy of this book was provided to me by Biblioasis via Edelweiss in exchange for an honest review.  I would like to thank the publisher, the author and Edelweiss for providing me this opportunity.  All opinions expressed herein are my own.

Time to trot out a list of some of my very, very favorite books ever, those closest to my heart, the ones that knocked my world ever so slightly off its axis.  You may like them, you may not, but you should at least give them a try.  Some are obvious choices, some are hiding just beyond that tree over there, but each one of these, at the time I read them, stirred up something deep inside me that I couldn’t always quite name.  Stand aside and welcome the first three on the list (in no particular order):

A Constellation of Vital Phenomena

This is a VERY fresh addition to my list, but a most deserving one.  You might think that a novel taking place in the recent history of war-torn Chechnya couldn’t be anything but a complete downer, but you’d be wrong.  Set in depressing circumstances, yes, but Anthony Marra’s 2013 debut novel punched me flat with the darkly funny, warped humor of its characters.  This particular exchange caused me to choke on my wine:

“’Let me tell you a story,’ the brother said, holding his cigarette like a conductor’s baton.  ‘When I was a child I had a pet turtle, whom I named after Alu because they shared a certain – how can I put it – bestial idiocy.  Once I went to Grozny with my father and five of my brothers for the funeral of my father’s uncle, and we left so quickly I hadn’t the time to provide the food for Alu the Turtle.  My brother, Alu the Idiot, had a fever and stayed home with my mother.  In a moment so taxing on that little intellect that steam surely shot from his ears, Alu the Idiot remembered to feed my turtle.  He caught grubs and crickets, likely tasting them before he gave them to my beloved crustacean.  Since then Alu the Idiot has grown into a Gibraltar-sized hemorrhoid, but when he was a child he used the one good idea his life has allotted him to feed my turtle, and because of it, you get a second favor.’

‘Excuse me, half crustaceans.’

The brother gaped at her.  ‘You should hear yourself.  You sound ridiculous.’

‘A turtle is one hundred percent reptile,’ she said.  ‘I imagine even Alu knows that.’

‘Don’t insult me.  Everyone knows a turtle is a crustacean on its mother’s side.’

‘Explain that to me,’ she said, shifting in the seat as the car spun in circles.

‘A lizard fucks a crab and nine months later a turtle pops out.  It’s called evolution.’

‘I hope your biology teacher was sent to the gulag,’ she said.”

If you don’t think that’s hilarious, you should just stop reading right now, since you were obviously born without the funny gene, and you and I will not get along . . . ever.  Who thinks up a conversation like that?  Anthony Marra apparently.  He’s an acrobat with dialogue and, unbelievably, you find yourself wanting to hang out in Chechnya with these folks.  As Meg Wolitzer put it in her review for NPR, “The main characters are vivid and real and stuck, and I guess I wanted to be stuck along with them.”  I could have stayed stuck for the rest of my life, and I was truly, truly bummed when I turned the final page and found there were no more pages.  Marra, you have ruined me for anything else.  Ruined me, I tell you!!

As I read this book, I couldn’t help but wonder how Anthony Marra was going to follow up this masterpiece.  Would he go all Harper Lee, or Margaret Mitchell, or John Kennedy Toole on us, having shot his wad with the first book?  (Yes, I know Harper Lee finally did publish again . . . albeit controversially.)  Evidently not, since his next offering, a collection of short stories called The Tsar of Love and Techno just hit book stores this month.  Believe me, it’s on my short list to read soon.

Neal Stephenson, how do I love thee?  Let me count the ways.

An attorney I work for (I’ll call him Bon . . . as in Scott) and I have a long-standing disagreement about Stephenson.  Bon’s favorite is Snow Crash while mine is Cryptonomicon.  He does not like Crypto one bit, says he’s tried to read it a couple of times and couldn’t finish it.  Snow Crash may be more accessible, I’ll give him that.  Crypto is a massive tome totaling over a thousand pages, is intimidating just to look at, and even the name is a little daunting, but oh, once you crack it open!  (Hell, even I was intimidated the first time I saw this book, and I love a good, fat fatty of a novel!)  Shifting between World War II and the present, and with Alan Turing making a cameo appearance (and by the way, go stream The Imitation Game for an in-depth look at Turing; go do it right now, I mean it! You can come back to this later!), this dense saga is a techno-nerd’s dream, but you don’t have to be a nerd or a techie to enjoy it.  You just have to get past the intimidation factor and give it a good, long chance.  Stephenson’s brand of intelligent, snarky humor helps tremendously and, just like Anthony Marra, his flair for dialogue makes my mind reel.  Even though this list is in no particular order, Cryptonomicon lands squarely in my Top Five Books of All Time.

It’s been a good twenty years since I read this, and it’s long overdue for a re-read.  Edward Abbey’s Desert Solitaire:  A Season in the Wilderness sparked my now decades-long love affair with hiking and natural places, although this isn’t a book about hiking per se.  Desert Solitaire chronicles Abbey’s three seasons as a park ranger in the Four Corners region of the American Southwest.  Abbey, in all his curmudgeonly glory, managed to turn me into a die-hard tree hugger in my impressionable twenties, and while my environmental sensibilities aren’t quite as fervid or radical as they once were, I still give thanks to Edward Abbey each time I head down the trail.

No way in hell my entire Baker’s Dozen (Plus One) list will fit into one blog entry, so I hope that I can entice you back for Part II in a few days.  Peter Matthiessen, Ayn Rand and Lee Smith are waiting in the wings!