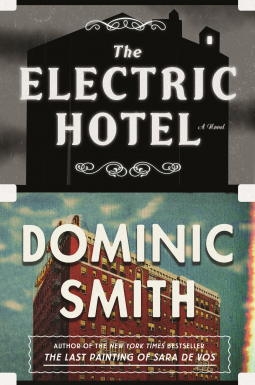 The title?   Didn’t think it sounded too promising, you know; but I was wrong, so very, very wrong; and it was my good fortune to meet an elderly French gentleman, Claude Ballard, living out his life in a rundown Hollywood hotel.  This is not the electric hotel of the title, but it is the same hotel where, according to this novel, D.W. Griffith died.  Turns out, Mr. Ballard has a history in silent film that predates Griffith, and we go back in time to learn about the earliest days and the simplest of films, moving figures in a stream of light.   Here is a man who films his own sister’s death from tuberculosis as he tries to understand and promote this new medium.  Meet Sabine Montrose, a bold-going stage actress who transitions to film and then into exile after starring in a doomed masterpiece.  And Chip Spalding, teenage Australian daredevil, forerunner of all Hollywood stuntmen to come.  Hal Bender from Brooklyn, where he stays a step ahead of trouble eking out a living with nickel peepshows, to studio head where he struggles to stay…………

Unforgettable.  Lose yourself in layer upon rich layer and a stellar cast of characters.  Read Dominic Smith’s lovely new work, you lucky reader, you.  It is truly a find.

The Electric Hotel is not scheduled for release until June 4, 2019 so put this on your calendar.  Not to be missed!!!

Full Disclosure: A review copy of this book was provided to me by Farrar, Straus and Giroux / Sarah Crichton Books via NetGalley. I would like to thank the publisher and the author for providing me this opportunity. All opinions expressed herein are my own.