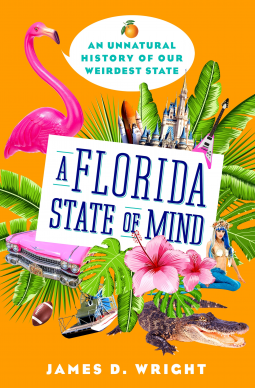 Had a sampling good time (admittedly not front to back), and “weirdest state” is the author’s opinion, not mine!  However, we had an aunt in Florida, married several times, who had a dog she named Mister.  It gave her a kick to go to the door and call, “Here, Mister, Mister,” she said.  A little weird, I guess.  Mr. Wright lives in Florida and calls this “…a collection of factoids, oddments, stories, and backstories…”.  I call it fun.  Let’s see.  Florida remained loyal to Britain during the Revolution, so no fourteenth colony.  How “oh wow” rich is that laid back Jimmy Buffet who, we’re told, is Warren Buffet’s distant cousin?  What happened to the Florida of Fifties and Sixties vacations, Silver Springs and glass-bottomed boats, the mermaids of Weeki Wachee?  Did Gore or Bush win the contested 2000 Presidential race in Florida, and how many types of “chads” were there?  Ha, there were four identified and named!  One was a swinging chad.  Didn’t you date him?  Florida is known as the “Road Kill State”, and there’s an interesting flipside.  White-tailed deer kill more humans than sharks, alligators, bears, snakes and insects combined.  A recipe for Tang pie is here too.  Check it out on April 30!

Full Disclosure: A review copy of this book was provided to me by St. Martin’s Press / Thomas Dunne Books via NetGalley. I would like to thank the publisher and the author for providing me this opportunity. All opinions expressed herein are my own.