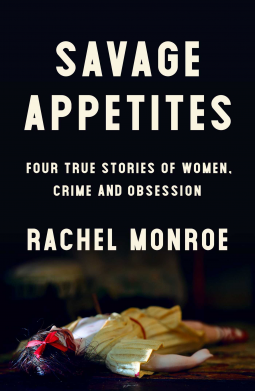 Now just hold your horses, all you obsessed, bloodthirsty, thrill-seeking ladies out there.  This title would have you devouring the pages of the book, ripping at them with fang and claw…..drooling.  ‘Fraid not.  This is sociology, my friends, and, according to the sociological theorizing in Rachel Monroe’s book, it is the ladies who are obsessed with true crime.  Maybe, but it does make interesting reading, and the true stories of four women are cited as examples of cultural archetypes – Detective, Victim, Defender, Killer.

The unlikely Detective is Frances Glessner Lee, a wealthy heiress, who, in the Forties, constructed Nutshells, exquisitely detailed miniatures of crime scenes as training tools for law enforcement….how to see and analyze a crime scene.  Arguably, Ms. Lee’s work could be called the beginning of forensic science, introducing a thread that continues throughout the book.  Many of Ms. Lee’s Nutshells still exist and have been exhibited as art.

The Victim is Patti Tate, younger sister of Sharon Tate.  She inherits her mother’s fight for victim’s rights.  The Defender, Lorri Davis, marries incarcerated Damien Echols of the West Memphis Three and works tirelessly for his eventual freedom, one of many women who befriend and, eventually, love imprisoned men, investing them with a bad boy sexiness or a mysterious uniqueness.  The Killer is a very young Lindsay Souvannarath, and her James, internet buddies/imaginary lovers involved online with admirers of Eric Harris and Dylan Klebold.  Mostly chatter and bravado, but Lindsay and James actually make plans to shoot up a mall in Halifax, Nova Scotia where he lived.  Unrealistic plans.  Neither had ever fired a gun, and she insisted on wearing heels.

These four women are springboards for broader discussions, a sociological mash-up that tries to cover the waterfront and is only more or less successful.  A Sisyphean task, either in search of a point or adrift in a sea of them, so don’t obsess over it.  Just leave your savage appetites in the basement and nibble thoughtfully on this one.  Here’s the thing.  Without reference, I named Sharon Tate, Damien Echols, the West Memphis Three, Eric Harris and Dylan Klebold , and you know who they are.  Don’t you?

Full Disclosure:  A review copy of this book was provided to me by Scribner via NetGalley in exchange for an honest review.  I would like to thank the publisher, the author and NetGalley for providing me this opportunity.  All opinions expressed herein are my own.