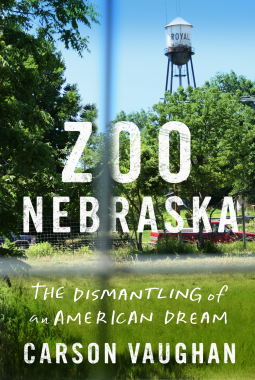 The tiny, tiny town of Royal, Nebraska had a zoo, more of an optimistic roadside attraction or a sort of do-it-yourself menagerie with aspirations.  It never made much money (or any at all), but the people of Royal, near the South Dakota border, were proud of it; it was popular, and it gave them something to fight over.  Nebraska native Johnny Carson even donated money to build a “primate center” for Reuben the chimp who was later joined by Jimmy Joe, Tyler and Ripley.  Zoo Nebraska, in its day, housed a variety of wildlife, but the chimpanzees, the “non-human primates”, were the center of the attraction.  However, it’s the “human primates” (though I’m hard-pressed to make a distinction) who are at the center of Carson Vaughn’s book.  If this “one-horse town” had had a horse, they’d have fought over the horse.  They did, in fact, have someone who made buggy wheels, quite a unique character, and, boy, did they fight with him.  Did you know there’s still a market for buggy wheels?  It’s a wasted day if you don’t learn something.

Anyway, Royal resident and really good-hearted fellow Dick Haskins fell in love with Africa and the Great Apes after seeing a Jane Goodall documentary in eighth grade.  From that point he’s all about going to Africa to work with Goodall or Dian Fossey, so after college, he finds a job at the Folsom Children’s Zoo in Lincoln, Nebraska working with “non-human primates”, and this is where he meets Reuben the chimp.  And he’s off – on his way to becoming a self-styled primatologist.  When the Folsom Zoo seeks to relocate Reuben to another facility, Haskins gains custodianship of the chimp and begins planning a primate center in, of all places, Royal, Nebraska – population about sixty.  The school is closed; the Methodist church is closed; the library is closed.

For years, Haskins works himself to the bitter end without pay – adapting as his hoped-for primate center becomes a small zoo, and losing sight of Africa all together.  When, at last, he must give it up, Zoo Nebraska begins its long and contentious downhill slide to oblivion.  Just plain folks doing the best that they can?  Maybe, maybe not.  But first Royal will be in the national headlines and not in a good way.  Human primates.  What is that saying about big fishes in small ponds?  A good piece of non-fiction.  I read it, and, if I were you………I’d read it, too!

Zip on out to your local bookstore for this one or support an indie bookseller online by clicking here.

Full Disclosure:  A review copy of this book was provided to me by Little A via NetGalley in exchange for an honest review.  I would like to thank the publisher, the author and NetGalley for providing me this opportunity.  All opinions expressed herein are my own.